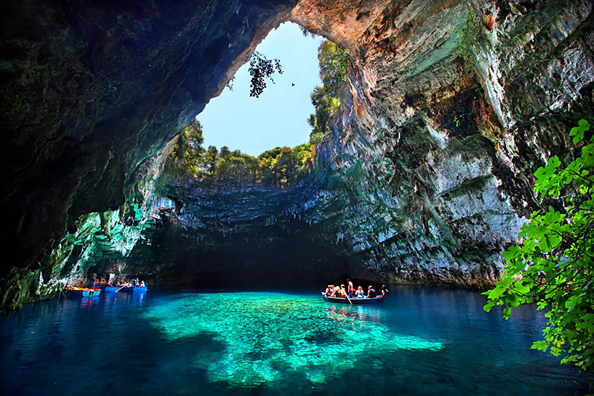 Melissani Lake, as the name suggests, is a nice lake with boats. But this lake is inside a cave. The cavern, once two big chambers, caved in several thousand years ago. Today the cave has the shape of a B, with two big water filled halls and an island in the middle. The first hall has a big oval opening to the surface, where the sunlight shines in. When the sun is directly overhead, its rays strike the ultramarine water, lighting the cave with blue light. So the best time to visit the cave is on a sunny day at the middle of the day. Nevertheless, a visit at the morning or in the evening has its own atmosphere. The boats seem to hover on a lake of blue light.
The cave is entered through an tunnel, which ends at a very small pier. The boats are on the lake all the time, waiting for visitors. When visitors arrive at the pier, one of the boats lands and lets them to embark.
The complete tour is done by boat, first making a round trip around the first hall with the hole in the roof. Then the boat passes the island on the opposite wall, where a small channel exists. This channel is too narrow to row, but there is a rope at the wall and the gondolier pulls the boat through. The second hall is a huge cavern with an arched roof, which was also formed by a collapse, but this cave is more to center of the island, and because of the slope of the hill, the overlying rock is still thick enough. Now it seems the ceiling has come to an end, it forms a pretty perfect dome which should be rather stable.
The second chamber has numerous big stalactites which are green from algae and moss. With the daylight coming in, this is not a big surprise. And despite their size, they look minute in the big dome. This chamber is lit with electric light, unfortunatley only yellow lamps, rather typical for Greek caves and giving this part of the cave a sick look.
The island is not visited during a tour. There are some stalagmites, but they are also green and unimposing. But the island is rather interesting for the archaeological remains found here. During the first exploration in 1951, an ancient lamp, which is now on display in the Archaeological Museum of Argostoli, was found there.
The excavations of 1962 were made by S. Marinos and produced few but important relics of a former Minoan culture on Cephalonia. Oil lamps, plates and figures show the god Pan and several nymphs. This is, why the cave is sometimes called Cave of the Nymphs, but this is a bit confusing, as there are dozens of nymph caves in Greece. However, the lake was named after one of the nymphs, the nymph Melissanthi.
An artificial balcony offers an enchanting view from the top of the cave. Unfortunately this balcony is now closed to the public. The hole was fenced rather freehandedly, including the balcony and so there is now no chance see the cave despite the cave visit. Knowing a bit about the intensive Greek urge for security measures, we suppose financial interests behind this fence. The cave trip is the most expensive of all Greek caves reviewed, especially if the tip for the gondolier is included.
Lake Melissani has an absolute invisible specialty, which sounds pretty strange. The lake water is brackish, a mixture of sea water and sweet water. The cave is about 500m from the sea, and the water level is a metre higher than sea level, and the brackish water rises from a 30m deep cave system on one side of the cave and flows silently to the other end of the cave, flowing through narrow crivices into the sea.
Here the water from the

Katavothres on the other side of the Island reappears. This was discovered by dye tracing experiments in 1959. For a detailed explanation of this unique geological structure, have a look at the