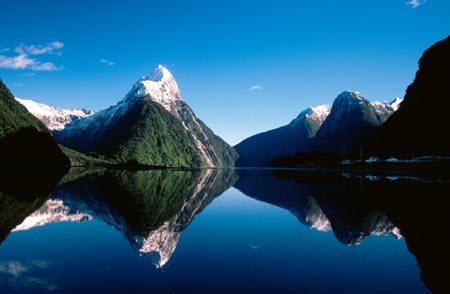 From Wikipedia, the free encyclopedia
Milford Sound (Piopiotahi in Māori) is a fjord in the south west of New Zealand‘s South Island, within Fiordland National Park, Piopiotahi (Milford Sound) Marine Reserve, and the Te Wahipounamu World Heritage site. It has been judged the world’s top travel destination in an international survey (the 2008 Travelers’ Choice Destinations Awards by TripAdvisor)[1][2] and is acclaimed as New Zealand’s most famous tourist destination.[3] Rudyard Kipling had previously called it the eighth Wonder of the World.[4]

Etymology
Milford Sound is named after Milford Haven in Wales, while the Cleddau River which flows into the sound is also named for its Welsh namesake. The Māori named the sound Piopiotahi after the thrush-like piopio bird, now extinct. Piopiotahi means “a single piopio”, harking back to the legend of Māui trying to win immortality for mankind – when Maui died in the attempt, a piopio was said to have flown here in mourning.[5]


Geography
Milford Sound runs 15 kilometres inland from the Tasman Sea at Dale Point – the mouth of the fiord – and is surrounded by sheer rock faces that rise 1,200 metres (3,900 ft) or more on either side. Among the peaks are The Elephant at 1,517 metres (4,977 ft), said to resemble an elephant‘s head,[6] and The Lion, 1,302 metres (4,272 ft), in the shape of a crouching lion.[7]
Milford Sound sports two permanent waterfalls all year round, Lady Bowen Falls and Stirling Falls.[8] After heavy rain however, many hundreds of temporary waterfalls can be seen running down the steep sided rock faces that line the fiord. They are fed by rain water drenched moss and will last a few days at most once the rain stops. 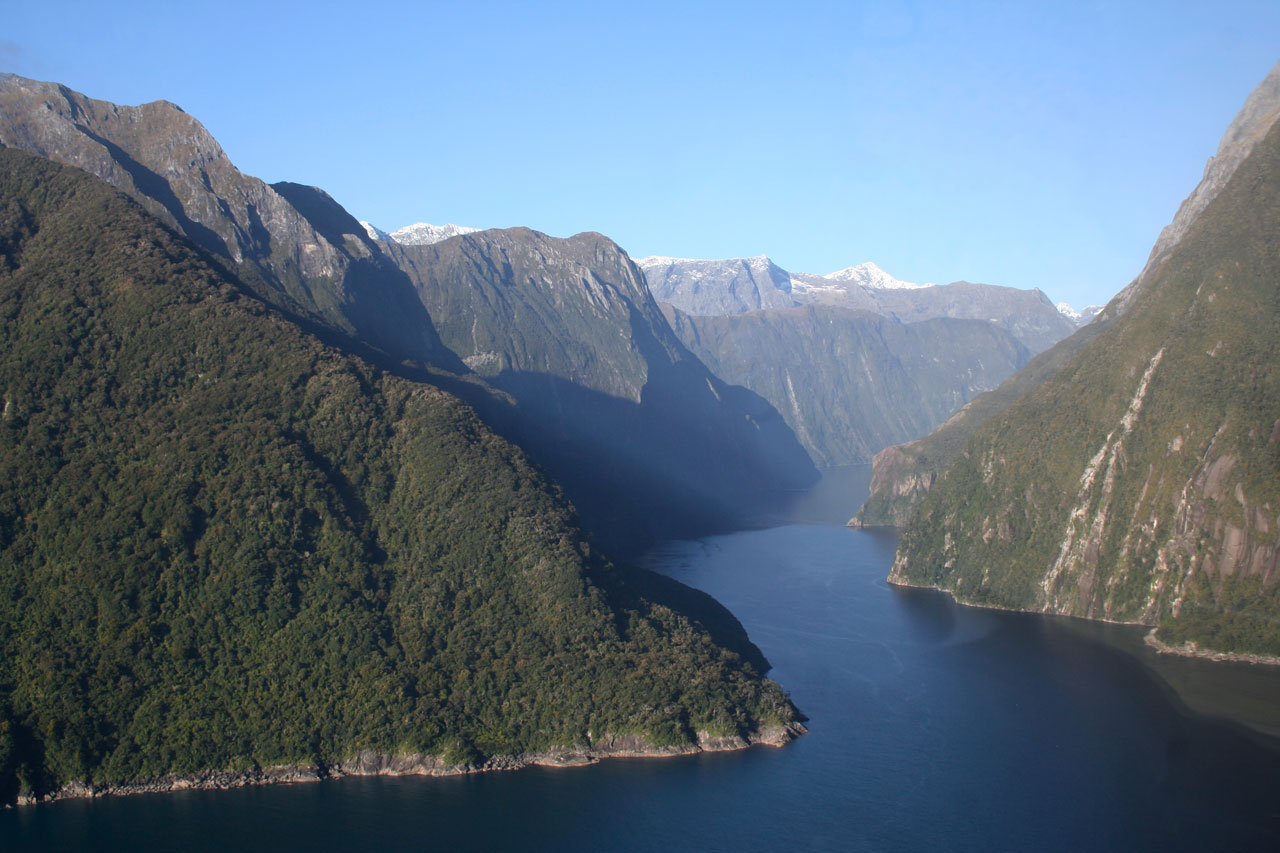 Climate
With a mean annual rainfall of 6,813 mm (268 in) on 182 days a year,[9] a high level even for the West Coast, Milford Sound is known as the wettest inhabited place in New Zealand and one of the wettest in the world. Rainfall can reach 250 mm (10 in) during a span of 24 hours.[10] The rainfall creates dozens of temporary waterfalls (as well as a number of major, more permanent ones) cascading down the cliff faces, some reaching a thousand metres in length. Smaller falls from such heights may never reach the bottom of the sound, drifting away in the wind.
Accumulated rainwater can, at times, cause portions of the rain forest to lose their grip on the sheer cliff faces, resulting in tree avalanches into the sound. The regrowth of the rain forest after these avalanches can be seen in several locations along the sound.
Wildlife
Lush rain forests cling precariously to these cliffs, while seals, penguins, and dolphins frequent the waters and whales can be seen sometimes. The sound has been identified as an Important Bird Area by BirdLife International because it is a breeding site for Fiordland Penguins.[12]
History
The fjord was a playground[citation needed] for local Maori who had acquired a large amount of local marine knowledge including tidal patterns and fish feeding patterns over generations prior to European arrival. The fjord remained undiscovered by Europeans until Captain John Grono discovered it c.1812 and named it Milford Haven after his homeland in Wales. Captain John Lort Stokes later renamed Milford Haven as Milford Sound.[13]Milford Sound was initially overlooked by European explorers, because its narrow entry did not appear to lead into such large interior bays. Sailing ship captains such as James Cook, who bypassed Milford Sound on his journeys for just this reason, also feared venturing too close to the steep mountainsides, afraid that wind conditions would prevent escape (this refers to Doubtful Sound, so named as Cook thought it doubtful he would escape if he sailed in).[citation needed] While Fiordland as such remained one of the least-explored areas of New Zealand up to the 20th century, Milford Sound’s natural beauty soon attracted national and international renown, and led to the discovery of the Mackinnon Pass in 1888, soon to become a part of the new Milford Track, an early walking tourism trail. In the same year, the low watershed saddle between the Hollyford River and the Cleddau River was discovered, where the Homer Tunnel was to be developed about sixty years later to provide road access.[14] As of the 2006 census, just 120 people lived in Milford Sound,[15] most of them working in tourism or conservation. 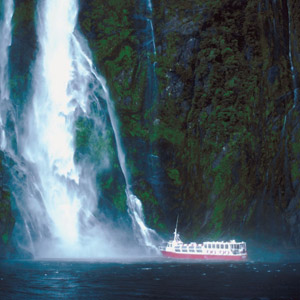 Tourism
The beauty of this landscape draws thousands of visitors each day, with between 550,000 and 1 million visitors in total per year.[15][16] This makes the sound one of New Zealand’s most-visited tourist spots, and also the most famous New Zealand tourist destination,[3] even with its remote location and the long journey from the nearest population centres. Almost all tourists going to the sound also take one of the boat tours which usually last one to two hours. They are offered by several companies, departing from the Milford Sound Visitors’ Centre. There is also the option of extended overnight cruises on Milford Sound.Overview Tramping, canoeing, and some other water sports are possible. A small number of companies also provide overnight boat trips. There is otherwise only limited accommodation at the sound, and only a very small percentage of tourists stay more than the day. Many tourists visiting Milford Sound usually stay in Te Anau to the south or Queenstown to the east.
An underwater tourist observatory found in one of the bays of the sound provides viewing of black coral, usually only found in much deeper waters. A dark surface layer of fresh water, stained by tannins from the surrounding forest, allows the corals to grow close to the surface here.[17]
In rainy and stormy days tourists can admire the play of the wind with the numerous waterfalls in Milford Sound. When meeting the cliff face the powerful wind often goes upward and waterfalls with a vertical drop get caught by wind, causing the water to go upwards.
Transport
Main article: Transport in Milford Sound
By road, Milford Sound is 307 km from Queenstown and 279 km from Invercargill (about four hours’ drive),[18] with most of the tour buses to the sound departing from Queenstown. Some tourists also arrive from the smaller tourism centre of Te Anau, 121 km away. There are also scenic flights by light aircraft and helicopter tours to and from Milford Sound Airport. The drive to Milford Sound itself passes through unspoiled mountain landscapes before entering the 1.2 km Homer Tunnel which emerges into rain-forest-carpeted canyons that descend to the sound. The winding mountain road, while of high standards, is very prone to avalanches and closures during the winter half of the year.
The long distance to the sound means that tourist operators from Queenstown all depart very early in the day, arriving back only late in the evening. This ensures that most tourists visit Milford Sound within a few hours around midday, leading to some congestion on the roads and at the tourist facilities during the main season. The peak-time demand is also the reason for the large number of tour boats active in the sound at much the same time.[16]
Over the years, various options of shortening the distance to Milford Sound from Queenstown have been mooted, including a gondola route, a new tunnel from Queenstown, or a monorail from near Lake Wakatipu to Te Anau Downs. All would reduce the current round-trip duration (which has to travel via Te Anau), thus allowing tourism to be spread out over more of the day. While a gondola is considered to be out of the running after the DOC declined approval for environmental reasons, the tunnel and the monorail proposals have applied to the Department of Conservation for concessions for land access.[16]
Related Posts