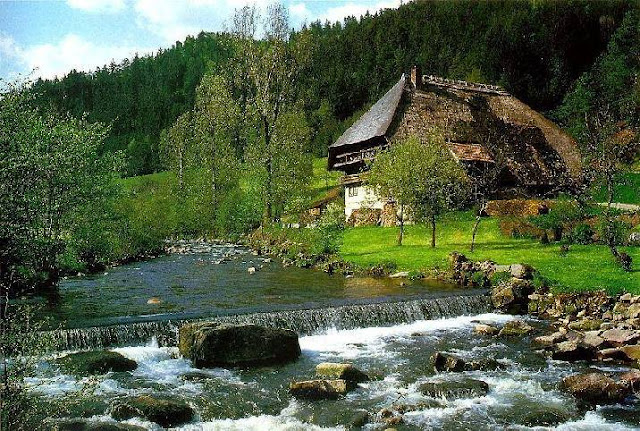 The Black Forest (German: Schwarzwald, pronounced [ˈʃvaʁt͡svalt]) is a wooded mountain range in Baden-Württemberg, southwestern Germany. It is bordered by the Rhine valley to the west and south. The highest peak is the Feldberg with an elevation of 1,493 metres (4,898 ft). The region is almost rectangular with a length of 160 km (99 mi) and breadth of up to 60 km (37 mi). The name Schwarzwald (German for “Black Forest”) derives from the Romans who referred to the thickly forested mountains there as Silva Nigra or Silva Carbonara[citation needed] (Latin for “Black Forest”) because the dense growth of conifers in the forest blocked out most of the light inside the forest.

The Black Forest consists of a cover of sandstone on top of a core of gneiss and granites. Formerly it shared tectonic evolution with the nearby Vosges Mountains. Later during the Middle Eocene a rifting period affected the area and caused formation of the Rhine graben. During the last glacial period of the Würm glaciation, the Black Forest was covered by glaciers; several tarns (or lakes) such as the Mummelsee are remains of this period.

Administratively, the Black Forest belongs completely to the state of Baden-Württemberg and comprises the cities of Pforzheim, Baden-Baden and Freiburg as well as the following districts (Kreise). In the north: Enz, Rastatt and Calw; in the middle: Freudenstadt, Ortenaukreis and Rottweil; in the south: Emmendingen, Schwarzwald-Baar, Breisgau-Hochschwarzwald, Lörrach and Waldshut.

The forest mostly consists of pines and firs, chiefly a mixture of the European native Norway Spruce and American imported Douglas Fir and White Pine. Some of them are grown in commercial monoculture. Similar to other forested regions, the Black Forest has had areas that were annihilated by mass logging. Due to logging and land use changes the forest proper is only a fraction of its original size and the original hardwood trees were replaced by fast-growing conifers. The cyclone Lothar downed trees on hundreds of acres of mountaintops in 1999. This left some of the high peaks and scenic hills bare, with only primary growth shrubs and young fir trees.

The main industry is tourism. In addition to the towns and monuments noted below, the Black Forest is crossed by numerous long distance footpaths, including some of the first to be established. The European long-distance path E1 crosses the Black Forest following the routes of some of the local long-distance paths. There are numerous shorter paths suitable for day walks, as well as mountain biking and cross-country skiing trails. The total network of tracks amounts to around 23,000 kilometres (14,000 mi), and is maintained and overseen by a voluntary body, the Schwarzwaldverein (Black Forest Society), which has around 90,000 members (figures from Bremke, 1999, p. 9).

Black Forest clockmakers are renowned for their precision clocks. Most of the mechanical clocks are now sold as antiquities as many factories were shut down after the First World War and the Second World War. A few factories survived the structural change.

There are many historic towns in the Black Forest. Popular tourist destinations include Freiburg, Calw (the birth town of Hermann Hesse), Gengenbach, Staufen, Schiltach, Haslach and Altensteig. Other popular destinations include such mountains as the Feldberg, the Belchen, the Kandel, and the Schauinsland; the Titisee and Schluchsee lakes; the All Saints Waterfalls; the Triberg Waterfalls, not the highest, but the most famous waterfalls in Germany; and the gorge of the River Wutach.

The Black Forest Open Air Museum is an open-air museum that shows the life of sixteenth or seventeenth century farmers in the region, featuring a number of reconstructed Black Forest farms. The German Clock Museum in Furtwangen portrays the history of the clock industry and of watchmakers.

For drivers, the main route through the region is the fast A 5 (E35) motorway, but a variety of signposted scenic routes such as the Schwarzwaldhochstraße (60 km (37 mi), Baden-Baden to Freudenstadt), Schwarzwald Tälerstraße (100 km (62 mi), the Murg and Kinzig valleys) or Badische Weinstraße (Baden Wine Street, 160 km (99 mi), a wine route from Baden-Baden to Weil am Rhein) offers calmer driving along high roads. The last is a picturesque trip starting in the south of the Black Forest going north and includes numerous old wineries and tiny villages. Another, more specialized route is the German Clock Route (Deutsche Uhrenstraße), a circular route which traces the horological history of the region.

Due to the rich mining history dating from medieval times (the Black Forest was one of the most important mining regions of Europe circa 1100) there are many mines re-opened to the public. Such mines may be visited in the Kinzig valley, the Suggental, the Muenster valley, and around Todtmoos.

The Black Forest was visited on several occasions by Count Otto von Bismarck during his years as Prussian and later German chancellor (1862-1890). Allegedly, he especially was interested in the Triberg Waterfalls. There is now a monument in Triberg dedicated to Bismarck, who apparently enjoyed the tranquility of the region as an escape from his day-to-day political duties in Berlin.

In addition to the expected kinds of wildlife to be found in a European forest area, the following types of animals may be observed in the Black Forest. Some of these animals include

Cattle: The Black Forest cattle belong to the rare breed of Hinterwald cattle.

The giant earthworm Lumbricus badensis is found only in the Black Forest region.

In some regions of the Black Forest, the Western Capercaillie can be found.

Dialects spoken in the Black Forest area are Alemannic and Swabian.

The German holiday of Fastnacht, or Fasnet, as it is known in the Black Forest region, occurs in the time leading up to Lent. On Fasnetmendig, or the Monday before Ash Wednesday, crowds of people line the streets, wearing wooden, mostly hand-carved masks. One prominent style of mask is called the Black Forest Style, originating from the Black Forest Region.

Wood-carving is a traditional cottage industry in the region and carved ornaments now are produced in substantial numbers as souvenirs for tourists. Cuckoo clocks are a popular example; they have been made in the region since the early eighteenth century and much of their development occurred there.

In the past singing bird boxes were produced as well.

chocolate cake, cream, sour cherries and Kirsch. The Black Forest variety of Flammkuchen is a Badisch specialty made with ham, cheese and cream. Pfannkuchen, a crêpe or crêpe-like (Eierkuchen or Palatschinken) pastry, is also common. The Black Forest is also known for its long tradition in gourmet cuisine. No fewer than 17 Michelin starred restaurants are located in the region, among them two restaurants with 3 stars (Restaurants Bareiss and Schwarzwaldstube in Baiersbronn)[7] as well as the only restaurant in Germany that has been awarded a Michelin star every year since 1966. At Schwarzwald Hotel Adler in Häusern, three generations of chefs from the same family have defended the award from the first year the Michelin guide selected restaurants in Germany until today.